For ~70% of all WHO listed viruses, no treatment is available and the antiviral drugs that do exist must be applied very early to be effective

VIROFIGHT proposes a radically new approach to fight any viral infection, such as COVID19, HIV infection, influenza and hepatitis B

Viral infections affect millions of people every year and cause tremendous human suffering and costs to society. For approximately 70% of all WHO listed viruses, no treatment is available and the antiviral drugs that do exist must be applied very early after infection to be effective. The current COVID-19 pandemic is only one such example. The VIROFIGHT consortium proposes a new approach to fight viral infections, to address the lack of broadly applicable antiviral treatments, and to create means for combating emerging pathogens.

Instead of targeting virus-specific proteins or enzymes by small molecules as current antivirals do, the Virofight consortium will construct synthetic nano-shells that can specifically recognize and engulf entire viruses to efficiently neutralize the pathogen.

The biocompatible nano-shells developed by the researchers combine DNA origami, protein design and in-vitro evolution. Their interior will be coated with a layer of virus-specific molecules for strong and specific virus binding. These binding effects will be tested at laboratory scale on a variety of viruses. To achieve this technological target, the interdisciplinary project integrates experts on supramolecular chemistry, molecular nanoengineering, and virology.

„Our mission is to develop and test prototypes of nano-shells that have the principal capacity to neutralize any given virus by engulfing them. We think this may lead to neutralization of the pathogen by occlusion. Different kinds of viruses could be fought using the same platform.”

“Our concept of using neutralizing nano-shells as antiviral drugs may also help to prevent negative effects that may be elicited by antibodies used for virus neutralization.”

Back in June 2020, the Virofight project was kicked-off within the high-time of the Covid-19 pandemic. No need to mention, that the Kick-Off meeting was organized fully remote, however the spirit and motivation was high and everyone was ready to start. Though by that...

In the last issue of "Fazination Forschung", the science magazine of the Technical University of Munich (TUM), Hendrik Dietz and the VIROFIGHT project was featured on how DNA capsules can capture viruses. The article gives insights from the first ideas to the...

Prof. Roman Jerala – nomination as personality of the year 2021 in Slowenia

photo: Dejan Javornik With his calm way of explaining science in a clear and simple way, Prof Roman Jerala from Kemijski inštitut in Ljubljana, has made a name for himself in the Slovenian media over the last 2 years. As a scientist, he is committed to helping the...

@EU_H2020 #FETOpen project developing & testing #prototypes of #NanoShells that have the principal capacity to neutralize any given #virus by engulfing them.

With this, we complete our #MeetTheTeam series and look forward to an exciting 2023 with new #innovations, more #results and in-person #GAmeetings 🤩 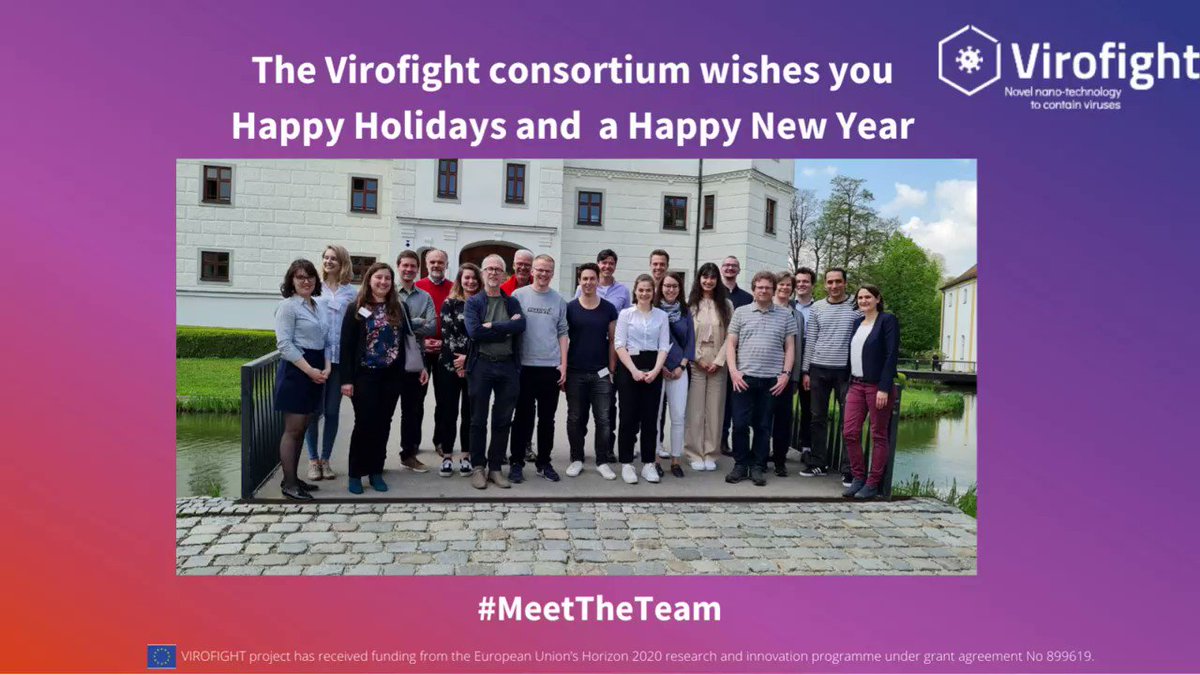 🎶It's the most wonderful time of the year...🎄... when researcher start writing poems about their research🌟🤩

DNA origami shells,
A novel class of antivirals,
A solution to prevent pandemics,
And all future global scourges.

These shells, so small and fine,
Can stop viruses in their tracks,
And save us from the ravages
Of deadly infectious attacks.

HIV continues to be a major global public health issue, having claimed more than 32 million lives so far. In 2018, 770 000 people died from HIV-related causes globally. There were approximately 38 million people living with HIV at the end of 2018 with 1.7 million people becoming newly infected in 2018 globally. Norovirus and rotavirus, even though perceived as causing merely an unpleasant diarrheal illness, are believed to cause approximately 300,000 deaths among children < 5 years worldwide. Adenoviruses are highly contagious non-enveloped viruses that cause a variety of human diseases ranging from gastroenteritis and common cold to severe infections of the eye or the lung. In immunosuppressed children and adolescents, infections may become life threatening. Due to their stable capsid structure, adenoviruses survive environment challenges and are e.g. found in 30-50% of fresh-water lakes in the alps. There is neither a vaccine available to prevent adenovirus infections nor any specific antiviral therapy.

The threat of global viral outbreaks is becoming acute due to climate changes and global migration with an urgent need for therapeutic platforms that could be deployed and made ready for therapeutic production in a short time. The latest example of such a global viral outbreak is the COVID-19 pandemic, with currently worldwide more than 15 million confirmed cases and more than 640 000 confirmed deaths reported by the WHO.

Importantly, no treatment is available for the vast majority of viral diseases (~70% of all WHO listed viruses) and the antiviral drugs that do exist typically must be applied very early after infection to be effective. This is because conventional antiviral drugs are at risk to display cytotoxicity: if the virus load becomes too high, the medication is no longer effective at tolerable dosages. Here, we propose an entirely new approach to fighting viral infections, to help reduce the scale and sheer impact of viral infections and to address the problem of a lack of broadly applicable antiviral treatments and to help targeting newly emerging pathogens.

The radical vision of VIROFIGHT exploits recent advances in supramolecular chemistry, molecular nanoengineering, and virology led by the consortium to completely change our current thinking of  antivirals: rather than targeting virus-specific proteins or enzymes by small molecules as current antivirals do, VIROFIGHT will engulf whole viruses with synthetic nano-shells to efficiently neutralize the pathogen. The mission of this project is to develop and test prototypes of engulfing nano-shells that have the principal capacity to neutralize any given virus. A new therapeutic solution that could fight different viruses using the same platform would represent a real breakthrough for antiviral medicine and could save many lives and costs to society.

Back in June 2020, the Virofight project was kicked-off within the...

VIROFIGHT has received funding from the European Union’s Horizon 2020 research and innovation programme under grant agreement No 899619.
Copyright © 2023 Virofight
Share This